Volleyball Event ‘Give Back’ to Molokai | Mousy News 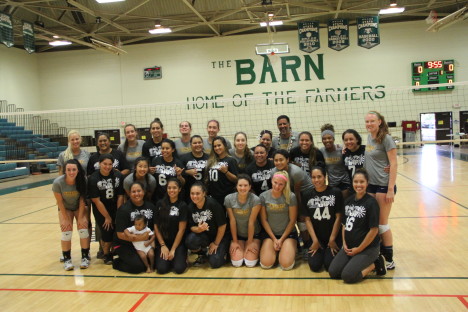 The ‘Give Back’ volleyball clinic and exhibition game was held last week at the Barn of Molokai High School. Molokai High School graduate and former head volleyball coach Matt Helm and his Whitman University girls’ volleyball team were here on the island for a week and conducted the clinic alongside former ball players. Professionals Logan Tom and Allen Allen and Farmer alumni and former UH high school staff Wahine Kale Adolpho.

Helm said he is happy to be returned to his home island. 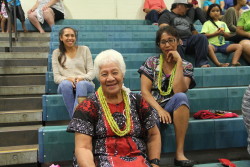 Judy Caparida and her late husband were honored for their support of Molokai Vollyball. Rick Schonely’s photo

He said: “Volleyball is very important to Molokai and someone planted the seed for me and many people have continued to water, fertilize and let it grow and that is what we hope to do with the room. Explore this, an exhibition game. “At the match, we honored Cappie and Judy Caparida for all they did for the Molokai Volleyball community.”

Tom is an all-American at Stanford University and a four-time Olympic athlete. Allen is a three-time American at the University of Hawaii and is a professional volleyball player and former Division I college coach who is now in the business of teaching volleyball worldwide.

Allen said local athletes have what it takes to succeed.

“These Molokai kids can do it,” he said. “They have a skill set and we just need to train them on what they have to do mentally when they’re on the pitch.”

The exhibition match was played against local Molokai volleyball club Kime Ka La and an enthusiastic crowd enjoyed some high-level volleyball, as Whitman University won 3-1 in four sets. (25-14, 25-23, 23-25, 25-21). Many former Coach Helm players at Molokai High, who won the State D II championship in 2010, competed against his current Whitman team and assisted the two-day clinic.

The two-day tutorial clinic was a huge success and was attended by more than 150 local Molokai youths. Allen has traveled the world teaching volleyball and says he loves what he does.

“I am very fortunate to be able to make a living teaching volleyball and hopefully we can pass on some of our legacy to the youth and then we will have Kalei Adolpho, Matt Helm and many more.” I said.

The Whitman girls and off-island instructors were able to enjoy Molokai’s hospitality, including an overnight trip to Kalaupapa. Helm said the trip was made possible with the help of many people. Helm says it’s only natural to want to give it back to Molokai.

He explains: “Growing up in a family that is very community oriented is part of us and so being able to give makes people feel good.

Many of the island’s local businesses and community members have contributed to the clinic and game exhibit, and helped make this possible for the youth of Molokai, as well as Whitman University.

“Whitman University has been very supportive in creating great experiences for our athletes and I feel that this trip will be a great experience for our athletes and I want to thanks to them as well as the ‘W’ and Williams Ohana club and all the Whitman community for Helm said. “One of my coaching philosophies is to teach life lessons through the sport and that is what the Molokai coaching community has done for us and continues to do for all the youth growing up in Molokai.”