The Tuxedo Lady Tornadoes showed spirit and ended a winning season with a gritty display in the Season 9 D Volleyball Finals in early November. 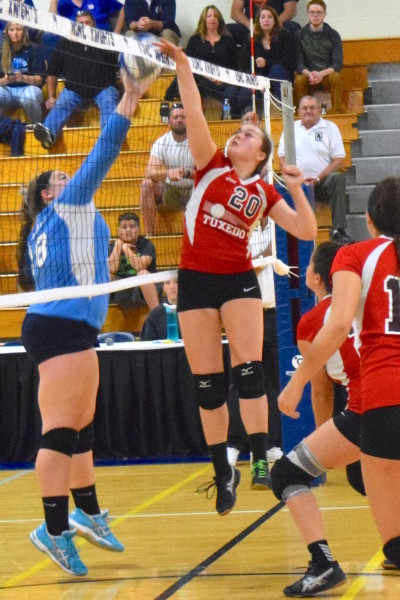 Emily Dowling of the Lady Tornadoes volleyball team of George Baker High School goes high to win a block in a recent game. Lady Tornadoes ended the year with a winning season.

Next up for Tuxedo is Pine Plains. The Tornadoes gave up a distinct height advantage, more so when outside senior Emma Meore left the field due to health issues.

Hines said: “We are very proud of these girls. “They never give up. They fought until the last minute. This is what Tuxedo is all about.”

“This team’s work ethic is an example for all of our students,” says Schrammel.

“Tuxedo has always demonstrated its outstanding ability with dedication and perseverance. Our team’s 3rd class volleyball championship title (1st timest since 2003), and reaching the final round of Class D, shows that this school can stand up to other schools in the field of sports.”