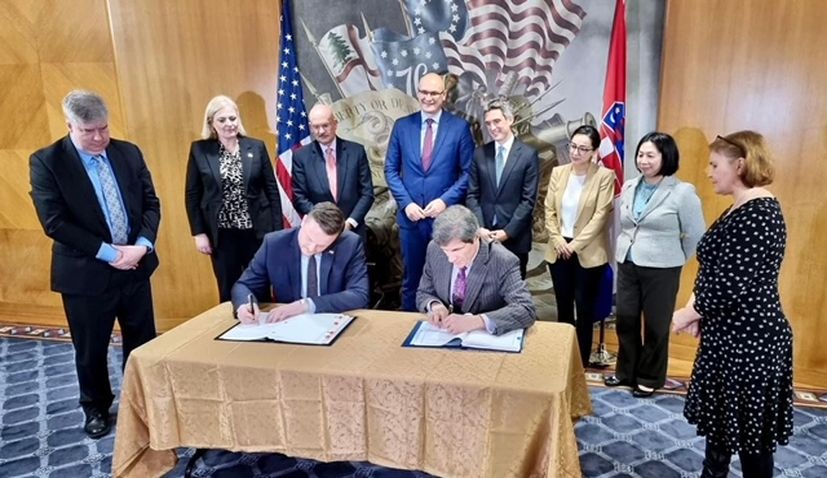 Washington, DC: The National Federation of Croatian American Cultural Foundations (NFCA) is pleased to announce that on Wednesday, December 7 at the US State Department, the Secretary of State for Economic Growth, Energy and Environment Jose W. Fernandez and the Croatian Minister of Finance Dr. Marko Primorac, signed a comprehensive income tax treaty between the United States and Croatia.

The new tax agreement must be approved by the US Senate and the Croatian Sabor before official implementation.

This tax treaty closely follows the US Model Tax Treaty. Last week, both American and Croatian diplomats praised this important step in strengthening business and trade relations between the United States and Croatia.

It is important to note that this is the first comprehensive tax treaty signed by the United States in over a decade.

The Double Taxation Avoidance Agreement will protect American and Croatian taxpayers from double taxation by providing tax rights between the two countries.

It also avoids potential overtaxation by reducing the withholding tax imposed by the source country on taxable income, which is important for individual taxpayers and companies.

The new tax treaty closely follows the US Model Tax Treaty. Key aspects of the new agreement include:

Abolition of withholding tax on cross-border payments of dividends paid out of pension funds and interest payments;

Deducting the tax on the payment of dividends in addition to the amount paid to the pension fund, as well as compensation;

Standard rules for the exchange of information to assist the revenue authorities of the two countries in the performance of their duties as tax administrators.

NFCA President Steve Rukavina noted that, “the signing of this bilateral agreement is another sign of the growing alliance between the United States and Croatia, which goes beyond NATO and alliances military by helping with this all-important new tax treaty. It should be acknowledged that there has been a serious cooperative effort by the National Federation of Croatian Americans and the Croatian American Professional Association, during the last six years to keep this agreement on the priority radar screen for the US Embassy in Croatia, the State. Department of the US Treasury. President of NFCA Steve Rukavina with the Croatian Minister of Finance Dr. Marko Primorac at the reception of the Croatian Embassy on December 7 (Photo: Submitted)

The Croatian Minister of Finance Dr. Marko Primorac led the Croatian delegation in Washington, DC for this treaty ceremony. The US Ambassador to Croatia, Mark Fleming, flew in from Zagreb to attend an Embassy reception to celebrate the historic event. In addition, other American diplomats were the State Department’s Director for Southeast Europe, Martin McDowell, along with the staff of the Croatian office, Adam Olszowka, in addition to two former US ambassadors to Croatia, James Foley. and Robert Bradtke.

In January, the NFCA will publish a critical analysis of this Double Taxation Agreement with a focus on key elements that will benefit Americans and Croatians, both as citizens and as citizens. as a company and the NFCA umbrella group is planning an educational “zoom”. event for early 2023 as well.