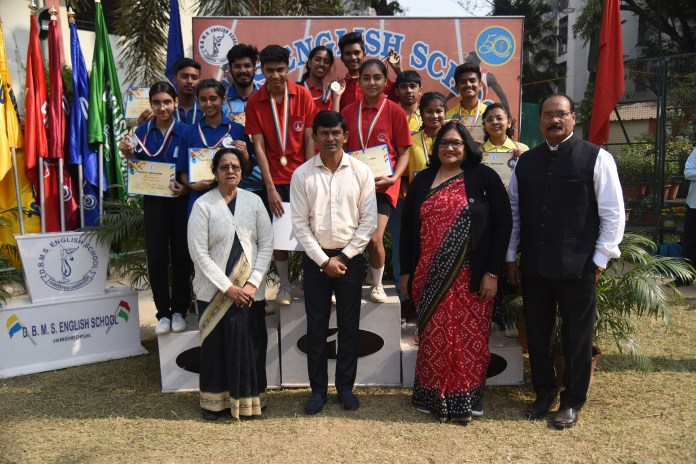 Jamshedpur, 20 Dec: The usual atmosphere of joy, excitement and joy prevails on campus as DBMS English School hosts its Annual Sports Day (2022-’23) at its playground on Tuesday, 20 December. The sporting passion and camaraderie among the competitors and fans of the Blue, Green, Red and Yellow House school sports is very evident as they compete for honors in a medley of track and field events.

The main guest on the occasion was Olympian and Tata Steel Senior Sports Manager, Anand Menezes who unfurled the Sports Flag and declared the meeting open. Classes X to XII students from the four Houses set the tone for the day with a smart march. The parade was led by the Commander in Chief, Suprit Patnaik who was joined by members of the School Senate, National Troops as well as Captains and Deputy Captains from the four assemblies who led their respective teams. The torchbearers that marked the start of the DBMS Annual Sports Day were Amandeep Kaur from Class XE and Sheetal Singh from VIII D.

A creative and engaging rehearsal performance by class VII students, ‘Shimmer and Shine’ is a tribute to Indian sportsmen for their achievements in the Commonwealth Games—2022. The next excitement was the Karate Drill which was performed by students from grades IV to VII. Not wanting to be outdone by the brilliant display, the third grade students performed ‘Song of the Sea’, a synchronized drill display while their fifth grade classmates added adrenaline with their drill, ‘Flow with Rhythm’ featuring a variety of Yog Asan. Various track and field events marked each moment with a keen sense of competition, but in the end, a strong sporting spirit and friendship emerged as the ultimate winners. The DBMS Annual Sports Day ends at 15:15.